For detailed information on dinghy towing or carrying your Portland Pudgy on deck, arm davits or swim platform davits, see the Owner’s Manual.

The Portland Pudgy safety dinghy can be strapped on top of the deck or cabin. The Pudgy is designed to be of manageable weight and to fit on the foredeck of many sailing and motor boats. If your boat has lifelines, we recommend installing pelican clips at the points where the lifeboat would be launched.

“How do I get my Pudgy on the cabin roof of my Nordic Tug?…It’s easy, with two people… better with more. One climbs on top of the roof (no Problem) the other stands on the dock with the pudgy vertical against the side. One pulls while …the other pushes( a short piece of rope tied to the bow helps) once its half way over the edge it just kind of falls in place. Then put it where you like. You can also do this on the salon roof (a little lower) or it will even fit INSIDE the stern of my 32 but does take up most of the room there. There are really a bunch of ways, try and you will find whats right for you. Put an old blanket between the Pudgy and your tug and it protects them both!” Fred F.,NY. See slideshow, above for a look at Fred’s Pudgy.

You can preset the Portland Pudgy lifeboat with exposure canopy and other survival gear before fastening it to the deck or cabin top. It must be strapped down with heavy line or strong webbing. Use the four through-holes near the gunwales. The attachment points on the mother boat for the line or webbing should be through-bolted in place. For more information see Lifeboat FAQ and contact us for a copy of the Owner’s Manual, Chapter 4. Exposure Canopy. 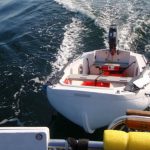 Dinghy towing is an important part of your boating experience. It is not an exaggeration to say that the Portland Pudgy dinghy tows beautifully. Video: Towing Portland Pudgy, Glacier Bay.

It tows so well for a few reasons:

“Towing characteristics are important, because even if you have dingy davits you still end up towing your dingy. Our first three dingy’s were awful for towing. We had an eight foot inflatable dingy that was essentially like towing a suction cup, and if the wind was over 15kts it would flip over…We also had…a Walker Bay 8 that towed like a little eggshell with no drag, but would also flip over at the first gust of wind…

The Portland Pudgy is none of these things. It tows with minimal drag…much less than our plywood or our inflatable dingy. It doesn’t ship water when you tow it, and if it did, it is a self bailing boat when it is empty…This single thing makes the Pudgy 1/10 the chore of owning compared to any other dingy we have had. ” Rolland T., MI 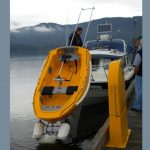 You may have noticed in the photos above that some of the Pudgys are in cradles.  Contact us: we may be able to give you some ideas. Here’s a particularly ingenious teeter totter loading system.

“We use an 18ft teeter-totter custom made of stainless tubular steel and a small pulley system to slide the pudgy up and down from the roof.” Greg L. W

You can see Greg’s loading system in action beginning around the 4:13 point of this video taken by another CDory owner.

You can lift the Portland Pudgy safety dinghy into a davit harness using the optional lifting eyes. The  eyes are set low in the interior of the cockpit (they also serve as as fastening points for safety harnesses). Once the boat is in position, ease the load off the lifting eyes and let the davit harness bear the weight of the boat. Note that the weight of the boat must be supported by a harness when on arm davits. 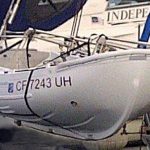 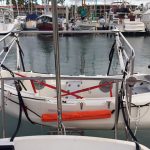 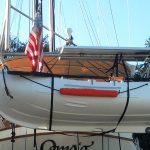 If your boat has a swim platform, you can use the Weaver davits designed expressly for the Portland Pudgy safety dinghy by Bob Weaver of Weaver Industries. 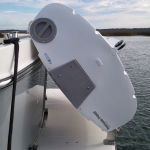 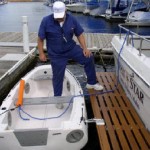 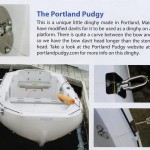 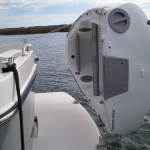 The Pudgy fits inside many station wagons and vans or on the roof of your car. It’s easy to transport on a light trailer or in a pickup truck.

At approximately 128 lb, the Portland Pudgy is easy to carry. It has a wheel in the keel for rolling the dinghy on docks or pavement. The grab-lines along the gunwales and the bow mounted bridle make for easy lifting.