Not All Who Wander Are Lost…Two People, One Cat, and their Ferro Gaffer Hannah, at Large… : “A year ago we bought a second hand Pudgy. In the last couple of weeks we have got around to sailing it. The two of us can stretch out in reasonable comfort and, whilst it is not the speediest dinghy I’ve ever sailed, it is a delight. Stable enough yet it’ll still pick up speed with a small gust…Are they expensive? On the face of it yes. BUT it does not require periodic inspection, at huge expense, for an item (your life-raft) you hope never to use….. You know when you dump it over the side to escape your home that it will work because you’ve been using it regularly to row ashore or pleasure sail around the anchorage which represents genuine value for money. Anyway, it’s our choice on the matter and we’re very pleased.”

Sailnet: Interesting discussion of inflatable life rafts v. dynamic unsinkable lifeboats. Scroll down to MedSailor:
“A sailing life BOAT instead of raft has the advantage of being able to be propelled. Towards land. Towards the shipping lanes. Toward the rain squall to gather rain. Towards the TICZ where the rains are. Towards more favorable currents. Towards the shipping lanes to help find a ship. And they allow you to sail to avoid being dashed on reefs or cliffs when you do reach land or to be able to more effectively meet up with that cargo ship that has found you. The rigid floor allows for better rest and less salt water sores, protection from sharks…. should I go on? Also, fabric rafts are black boxes. You hope the guy who serviced your raft wasn’t hungover. You DO get your raft serviced on schedule always right? What if that means sailing out of paradise just so you can get to a servicing agent?”

Cruisers and Sailing Forums: “I hope you enjoy your PP as much as we have since acquiring our Pudgy four years ago. This salty little tender has accompanied us along the Inside Passage (PNW), earning a permanent place alongside my 40′ Willard trawler. During the off-season we carry her on the boat deck, but for most of the cruising season she gets towed along on a short leash. I expect you’ll find your Pudgy to be a stable, sturdy, fun to row dinghy and I hope to add a sail for this coming season. Enjoy!”

Tug Nuts: “The Portland Pudgy is an awesome dinghy and will last for ever.”

Log of SV Del Viento: “Most cruisers set out with three boats: a primary vessel that features a head, galley, and berths; a dinghy, which functions as a launch for going ashore when anchored out; and an inflatable life raft to be used as a refuge in the event the primary vessel sinks. It is a nearly universal approach. But there’s an alternative, a two-boat approach, whereby a ship’s dinghy is configured to serve also as a life boat, should the need arise.”

Hermes Wanderings: I sail with a Portland Pudgy. It comes in various colors, but I chose white for some reason that I now forget. The Pudgy is the only functional Cruisers Lifeboat. No bobbing around in a flimsy, leaking, poorly provisioned liferaft for me. And I also can avoid the $600-$800 per year to repack my silly raft with useless items…I did a lot of research and finally found the Portland Pudgy website…I bought one. With all the toys. It was a lot of money at first. Similar to buying a dimghy and life raft, but years later, it has almost paid for itself. I haven’t had a repack fee ever…I went home and stuck a knife repeatedly in the life raft (honest). I threw it in a dumpster. It was a good feeling.”

Trawler Forum: “We’ve had a Portland Pudgy now for three seasons, and it is a great little dinghy. Very stable for loading & unloading, whether at the boat or shore. We cruise the BC coast which has a lot of rocks and barnacles which the Pudgy laughs at.”

Sailing Anarchy: “Even though I have one strapped on by bow I still don’t think the Portland Pudgy is a thing of beauty.  It is, well, pudgy looking.  But it DOES have a lot of beauty from a pragmatic standpoint.  When he designed the boat David Hulbert was looking to fill a need that he had and couldn’t fill with what was commercially available.  His goal was a boat that can row, sail, motor and act as a life raft – perhaps not with performance that sets the world on fire but still do it all well enough to satisfy.  He wasn’t looking to build a racing dinghy or a sport boat; I think his goal was something more in line with a sport utility vehicle or a lawn tractor.  Flexibility, safety, functionality and fun were the over arching themes.”

Captain Murph: “The tough little pudgy not only serves as Kelly IV’s tender and lifeboat, but also as an enjoyable “toy” once the mother ship has dropped anchor.  Rowing and sailing the highly versatile catboat around the anchorage is just great fun!”

C-Brats: “Portland Pudgy is the neatest dingy I have ever seen. Back years ago I had a nine foot Boston Whaler. It was so unstable we sold it and went to an inflatable. Yesterday I put the pudgy in the water for a sea trial,with the new Honda long shaft.( two horse). The side compartments allow the oars, life jackets, sails & mast, fenders, fishing gear and any other gadget to be stowed away, out from under foot. The weaver dive platfrom mounting gear works easily with the help of the weaver winch. I predict this will become thee dingy you will see for pocket trawlers and sail boats. That is if they ever perfect the manufacturing process to get it right. Thanks to the C-Brats site and Island Ranger for bringing this dingy to light. “

Morgan’s Cloud: A refreshingly open-minded critique by someone who admits he has never seen a Pudgy. “Even in areas where we continue to disagree with David [Hulbert, Pudgy designer], we are not necessarily right and him wrong, particularly since, as we said before in our first post on the subject, we have never even seen a Pudgy. Also, one of the things that makes this business of ocean voyaging so interesting is that there are a lot of different ways to do it in an efficient and safe manner.”

Footprints:   [After getting a new Pudgy and gaff-rig sail kit to replace an earlier one lost when the big boat was wrecked at anchor, in a storm] “We finally got a chance to break out the [new gaff-rig] sailing kit. We loved spending the day pottering around the anchorages in our last Pudgy. It was nice to be cruising again and nice to be back in our little sailing dinghy.  Since our last version, the sailing kit of the Pudgy had been repowered. It now had a much bigger rig with both a telescoping mast and boom, which pulled us along nicely in the light, shifty winds. We spent a pleasant couple of hours playing the breeze as we weaved our way through the islands near the anchorage.” 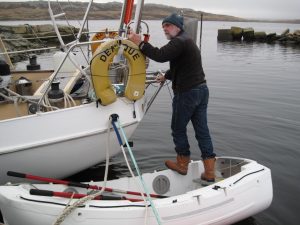 Freedom as a Journey

Three Sheets. A Look at the Practical Portland Pudgy.