Full-time cruisers, Micky and Bee, of Gaff Ketch Hannah, wrote about the Pudgy in their beautiful blog. Here’s one of their amazing photos.

“A year ago we bought a second hand Pudgy. In the last couple of weeks we have got around to sailing it. The two of us can stretch out in reasonable comfort and, whilst it is not the speediest dinghy I’ve ever sailed, it is a delight. Stable enough yet it’ll still pick up speed with a small gust. Even better from our viewpoint is that Toots [the cat] has taken to it and will readily come aboard to be ferried ashore for a roam around. We haven’t, as yet, persuaded her that she should try the sailing rig.
Are they expensive? On the face of it yes. BUT it does not require periodic inspection, at huge expense, for an item (your life-raft) you hope never to use….. You know when you dump it over the side to escape your home that it will work because you’ve been using it regularly to row ashore or pleasure sail around the anchorage which represents genuine value for money. Anyway, it’s our choice on the matter and we’re very pleased.” Micky and Bee.

Here’s a link to their blog: Not All Who Wander Are Lost…Two People, One Cat, and their Ferro Gaffer Hannah, at Large…

And a recent post from another Pudgy owner’s blog:

“The Portland Pudgy came along as an idea a number of years ago, when I first read about it in one of the boat magazines, though at that time you still couldn’t get one. It’s been on my mind ever since, and then last year in Belfast a couple of folks were rowing by in one and stopped to talk, on the way back out to their sailboat… The Pudgy looked even better in person than it had in all the literature and articles, and the occupants were very happy with it.
This boat is specially designed as a rowing and sailing dinghy at the same time as being able to be converted into a lifeboat, out at sea. A tremendous amount of thoughtful detail has gone into all of its various aspects – it is sturdy, and surprisingly stable; it rows well, is self bailing when unloaded, and it has a sailing rig. Made of roto-molded polyethylene, the same stuff used for plastic kayaks, it’s tough enough to be bumped around and not care.
Self-bailing counts for a lot – left at the float in the rain, the boat will not be half sunk when you come back three days later. Bailing after every rain is a task I have been particularly opposed to adding to our boat fun. If you were to tow it, there would also be no worries about filling with water in the waves.

You can read more on the blog: Sailing Auklet–Small Sailboat Cruising and Related Thoughts.

The Smalls on their way south from New Hampshire:

“Just a day in the life of sailing down to warm weather. A simple task of doing laundry can turn into a long process. Having fun in our Portland Pudgy.”  Nate Small. Another great video from the Smalls! This one, “Let’s Do Some Laundry” really gives you an idea what a great workboat the Pudgy is.

“Towing characteristics are important, because even if you have dingy davits you still end up towing your dingy.  Our first three dingy’s were awful for towing.    We had an eight foot inflatable dingy that was essentially like towing a suction cup, and if the wind was over 15kts it would flip over… We also had a Walker Bay that towed like a little eggshell with no drag, but would also flip over at the first gust of wind… The Portland Pudgy is none of these things.  It tows with minimal drag…much less than our plywood or our inflatable dingy.  It doesn’t ship water when you tow it,  and if it did, it is a self bailing boat when it is empty…This single thing makes the Pudgy 1/10 the chore of owning compared to any other dingy we have had. ”  Rolland T., MI (See photo above.)

“I am amazed how well it sails and how fast it is. We even set up the lifeboat inflatable canopy and sailed it that way. It definitely is the way to go.

Something for sailors that actually does what it says it will.” Captain Allen Murphy 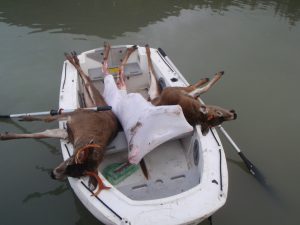 “What a boat, very nice…I am very happy with it… Life is good on the boat. Thanks again for all your help.” Roy B., Wasilla, Alaska (photo above)

“If you are an inveterate gunkholer but your boat draws 3 feet or more you may be missing a big part of cruising solitude. A Portland Pudgy gives you a chance to discover your own spots on the water….The recipe is simple.

Cool beverages may help. Sun block and DEET are prudent.  A hand-held vhf allows communication with the larger boat and allows one to hurl epithets at stink-potters who make a wake too close to a small anchored boat. And behold, the rebirth of your soul!” Cecil F., Little Rock, AR 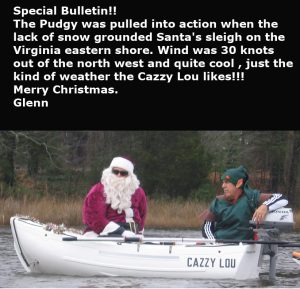 “TAKE HEART MY YANKEE BRETHREN! THE PUDGY WILL SET SAIL, A NOBLE CRAFT OF SHREWD DESIGN SHE’LL WEATHER EVERY GALE. PUDGY SEAWORTHY AND BEGGING ME TO TAKE HER OUT AGAIN.” Bert O., Anniston, AL