“I sail with a Portland Pudgy. It comes in various colors, but I chose white for some reason that I now forget. The Pudgy is the only functional Cruisers Lifeboat. No bobbing around in a flimsy, leaking, poorly provisioned liferaft for me. And I also can avoid the $600-$800 per year to repack my silly raft with useless items…I did a lot of research and finally found the Portland Pudgy website…I bought one. With all the toys. It was a lot of money at first. Similar to buying a dinghy and life raft, but years later, it has almost paid for itself. I haven’t had a repack fee ever…I went home and stuck a knife repeatedly in the life raft (honest). I threw it in a dumpster. It was a good feeling.” Captain Don, Hermes Wanderings blog. 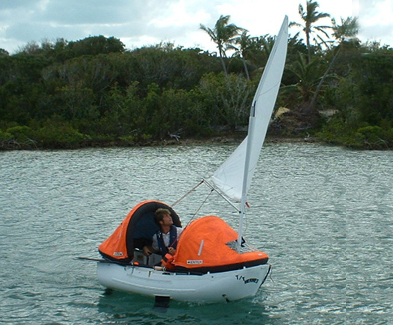 Don has this to say in another post:
“I am amazed how well it sails and how fast it is. We even set up the lifeboat inflatable canopy and sailed it that way. It definitely is the way to go.

Something for sailors that actually does what it says it will.”

“A year ago we bought a second hand Pudgy. In the last couple of weeks we have got around to sailing it. The two of us can stretch out in reasonable comfort and, whilst it is not the speediest dinghy I’ve ever sailed, it is a delight. Stable enough yet it’ll still pick up speed with a small gust. Even better from our viewpoint is that Toots [the cat] has taken to it and will readily come aboard to be ferried ashore for a roam around. We haven’t, as yet, persuaded her that she should try the sailing rig.
Are they expensive? On the face of it yes. BUT it does not require periodic inspection, at huge expense, for an item (your life-raft) you hope never to use….. You know when you dump it over the side to escape your home that it will work because you’ve been using it regularly to row ashore or pleasure sail around the anchorage which represents genuine value for money. Anyway, it’s our choice on the matter and we’re very pleased.” Micky and Bee.

Here’s a link to their blog: Not All Who Wander Are Lost…Two People, One Cat, and their Ferro Gaffer Hannah, at Large…

It was about 9PM on December 5, 2009 and the temperature had dropped into the 30’s with a water temperature in the low fifties on a windy black night in the anchorage next to Georgetown, South Carolina. Capt Don Quackenbush was preparing for bed when he heard a weak cry for help. When he rushed on deck, he realized that it was coming from the water on the other side of a boat anchored nearby.
I had no shoes, hat, or coat but realizing how cold it was I jumped into my Portland Pudgy dinghy and rowed over to see what had happened. I immediately saw fellow sailor Bill Hope with just his head above water and his dinghy upside down next to him. He was barely hanging from the bottom rung of his boarding ladder (above the water level), had been in the water for almost 30 minutes, and was suffering from severe hypoxia. I grabbed the hood of his foul weather jacket to hold his head above water just as his hand slid off of the ladder. He was now a 200lb waterlogged weight on the back of my dinghy. I had no choice but to try and haul him in over the stern and hoped that the dinghy wouldn’t swamp with our combined weight of almost 400 pounds in the back of the boat. I didn’t have much hope that it would work, but time was against Bill and I had to get him out of the frigid water. The Pudgy performed perfectly, I reached down into the water, got a hold of his belt and pulled him aboard without taking on any water at all. I was pleasantly surprised to say the least. By then other fellow cruisers had arrived and we got him aboard his boat and down below to some warm clothes. He probably wouldn’t have lasted another minute in that frigid water. We saved him in the nick of time.

Score one for the Portland Pudgy, the little boat that will save your life!”   Captain Don Quackenbush